What to do with rejects?

In a digital age with so many pictures takenI find myself deleting often hundreds of images at a time. Sometimes, especially if it isa a new bird then the the very first images from a shoot are the ones that end up in the digital trashcan. With a new bird I always want to see it first and try to see it well then try to get images. But once the record shot is in the can then more time & care can be taken to get better, much better pictures. At the end of the day I can find myself with a very large number of pictures that look almost identical and I continually ask myself how many can or should I keep? I know for example that I deleted something like 700 in focus and sharp images of White-tailed Plover. Why? Well because I had similar images of the bird or perhaps a feather was out of place, or no highlight in the eye or just because I did not like the pose of the bird. I certainly binned a lot of shots that many people would have been pleased with, especially those folk that could not get into see tha bird on its brief two-day visit to Seaforth last May.

So two weeks ago I was birding on the Inner Gulf Coast of Thailand and looking at Spoon-billed Sandpipers, image below. A fantastic bird and definitley one of the most sought after species for serious birders. Although seen well the images are only likely to be my own record shots. Especially seeing what a group of photographers have managed to achieve in China, or even what Birdwatch Editor Dominic Mitchell managed a couple of days later. But the day was not all about the Spoonies. Other Target species were Nordmann's Greenshank and Long-toed Stint. The Nordmann's stayed distant and took to flight when a flock of Brown-headed Gulls flew off. So would the Long-toed Stint save the day photographically speaking? I'd almost given up when I got onto a small group of birds feeding on a saltpan close to the car at Pak Thale. Curlew Sandpiper, Pacific Golden Plover, Broad-billed Sandpiper and the Long-toed Stints. The stints perfromed fantastically well and I managed a range of shots better than I could of wished for. But now I am asking myself what to do with all the rejects ? Below is one of the rejects. 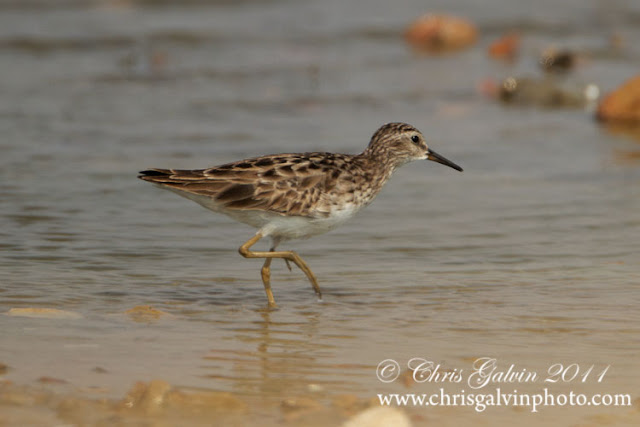 Why even consider keeping under par images if you have better ones?
I delete like mad.